Since you landed on this page, I’m sure that most of you already own a boot knife and you are ready to bring it to action.

A boot knife is basically a small fixed-blade knife which is designed to be carried on your boot. There are several important considerations which you must take into account for picking the best boot knife such as the design of the blade-point and overall length of the blade. If you want to find out more on how to pick the best boot knife, you can check out this post.

Tip 1: Tailor how you wear your boot knife according to the type of knife

To identify the best method to wear your boot knife, you need to understand the type of knife you are holding.

There are generally two types of blade – a fixed and folding blade.

A Folding Blade connects the blade to the handle by using a pivot, which allows you to fold the blade into the handle. This means you will be much less susceptible to injury as compared to having a fixed blade knife provided the folding blade can lock onto position well. For a folding blade, there are various locking mechanism available which you can explore including slip joint, compression lock and frame lock. 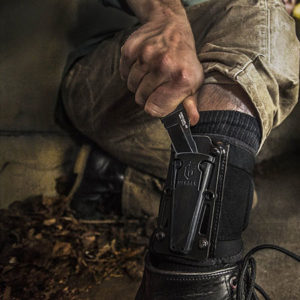 A Fixed Blade is what its name connotes, that the knife has a blade which is ‘fixed’. Most people who choose a fixed blade over a folding blade is often because fixed blades are stronger due to its tang. Besides preppers, outdoorsmen would also conceal a fixed blade because it has a multitude of uses.

Furthermore, you’ll need to take into consideration the blade length too.

After understanding what type of knife you own, you can choose a method of carrying which best fits you. This means you’ll be able to know clearly whether you want to put the knife inside or outside the boots and how you want to store it.

Tip 2: The knife should be easily accessible

No matter how you store it, you should ensure that the knife is easily accessible.

There are several considerations you need to look at for making your knife easily accessible.

First, you need to choose your clothing wisely. There are some types of clothing which limits your options for concealing your boot knife. For example, if you wear a skirt or a dress, you’ll only be able to store the boot knife inside your boots if you want to keep it concealed. I would recommend wearing jeans or long pants so that you have a choice to conceal your boot knife externally.

Second, you will need to look at the design of the knife. If your folding knife has a wave-shape opening feature, you’ll be able to use the spine of the blade to hook onto your clothing. It will be able to release really quickly too.

The knife sheath is the protective layer which holds the knife. It’s made to ensure that the knife is protected and that the person carrying the boot knife don’t get hurt.

The sheath should be made from high-quality materials, where the outer layer of the sheath should be soft so that the person wearing it don’t feel uncomfortable carrying it around and the inner layer is reinforced with materials that will ensure that a sharp blade cannot pierce through. For example, some sheaths which are made from leather will have reinforcements (such as metal sheets) placed either inside or outside of the sheath.

If your knife starts feeling loose in the sheath, you may want to invest some money in getting another more suitable one. The knife sheath will be important to

Tip 4: Remember to keep check of your local regulations

Before wearing a boot knife, remember to check your state’s regulations.

For example, previously, in Arkansas, the state’s statute made it illegal for someone to carry a knife as a weapon. The statute specifies that any knife that has a blade that is longer than 3.5 inches (8.9 cm) constitutes prima facie evidence that the knife is carried as a weapon.  Do note that Arkansas eventually repealed this law.

However, there are other states in the United States which has restrictions towards what knives you can carry and how you should carry them.

One excellent example is the Indiana law which makes it illegal to be found in possession of a dagger, dirk or switchblade knife on school property.

Although this tip is not directly relevant to wearing a boot knife, I thought it is important to highlight that you should check out your state’s laws before moving around with a boot knife.

Tip 5: Understand why you are wearing the boot knife

There are several reasons why most people want to conceal a boot knife.

Second, to protect yourself from an immediate threat. If this is your sole purpose, I would recommend that you conceal an extra knife. This gives you more opportunities to reach out for your knife and it will increase your chances of survival. Since how the threat comes would be unprecedented, the fact that you conceal more than one knife gives you the option of reaching out to a suitable knife.

Also, it’s better to place the boot knife externally so that it’s much easier to reach. You’ll be able to defend yourself easily. Another excellent option is to get a knife with the wave shaped opening feature which is extremely helpful. You’ll be able to get your knife out in seconds.