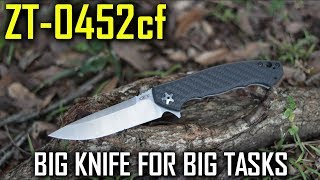 Zero Tolerance 0452CF In most cases, many people make different decisions in choosing the type of folding knives to carry especially when it comes to self-defense. As for my decision, I will probably go for a knife which is geometrically efficient, sharp, and reliable and it should be light.

The qualities I look for in folding knives are just many; those are just but a few. After all, fixed blade is not as good as a folding knife. I love being Zero Tolerance fan.

It also has a great blade which is very sharp when buying it. However, sharpening the knife is pretty possible though it takes longer than the fewer premium steels. The knife blade of this knife is stonewashed 4.1 and satin with a swedge at the spine top. The designs of its angles fashioned with contrasting finishes on its blade render it very appealing to look.

This knife has a large handle because of the blade size which is advantageous since it your hand a large surface area to hold. The backward grip is comfortable because the finger grooves were placed perfectly for your hands. There is no gimping on the handle, should it have been there, you could have found it unnecessary.

The knife has got some gimping or spine which is necessary for piercing or manipulated cutting activities. The position of the flipper is just on the handle of the knife, but I would have loved if it would have been just slightly bent upwards to harness more purchase on it vertically.

Weight: It is not easy to find knives of good quality in dimension such as the size and the weight which is practical as an EDC blade. Despite its strong material, it won’t surprise you to find that, its weight still light and easy to work with.

It has a strong titanium frame lock attached to the steel inside combined with early lockup. Unlike the old fashion which is problematic regarding the location of the angle. It used to be shallow allowing the lock bar to be pushed over so easily hence consequent late lock up; the new one is devoid of the above -identified shortcoming as has the much steeper angle and possess better design on its lock. The lock up has a reasonable strength, considerably early and posses no problem when using.

The pocket clip is small as compared to the knife itself and people who have sourced these pocket clips have praised their benefits. It is portable and due to its small size it makes hard for people to realize you are carrying a knife. It also ensures easy accessibility while you want to deploy it. The clip is very deep allowing only the handle to stick out. This conceals the nature of whatever you are carrying. Additionally, its small size enables to carry like any other folder making people hard to realize that it is just a mere knife.

The deployment of the knife is smooth. This is because the detent on it is reasonably strong such that the produced flipping activity appears as if it is spring facilitated. It has KVT ball bearing pivot mechanism at which the blade rides on. Closing the knife is satisfying because all you need to do is to poke it just behind the detent and allow the gravity to complete the other part of closing. Deployment is limited because the knife is entirely flipper in nature. Due to that feature, flipping in reverse grip is difficult in most of the occasions.

Q. Does the knife has a pocket clip?

A. Yes, the knife has its pocket clip

Q. Does the knife last for a longer period?

A. Yes, the knife lasts for a very longer period.

Q. Does this knife good for self-defense?

A. Yes, the knife is very good for self-defense.

Q. Is the knife heavy to carry around especially when traveling?

A. Yes, the knife is portable, and you can carry when traveling.

Q. Is the knife made of plastics?

Q. Do this knife has a good handle?

A. Yes, it has a very good handle.

Q. Is the knife user friendly?

A. Yes, the knife is user friendly.

I am not ashamed to be associated with Zero Tolerance 0452CF knife. It meets all the expectation I hard. It is now assimilated in my daily Carry kit. In my daily encounter, I use quit some knives, but this one is more outstanding as it goes very well with me. For the past four months, I have never left behind this knife as wherever I go I must take it. Words cannot describe the credibility of this knife; get one for yourself because it has the best quality. Am pleased that Zero Tolerance agreed to spearhead this production of the Dimitry Sinkevich collaboration. Am not shy to appeal for people to get themselves these knives because ever since I acquire mine, I have never regretted.